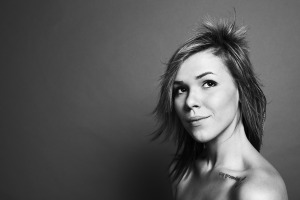 In a digital download world where artist photos and clever packaging are often overlooked, Laura Cole makes us pay attention. On the front cover of her raw, gritty and wildly infectious debut full length album Dirty Cheat, the quickly emerging, raspy voiced Ontario based singer-songwriter smiles playfully, relaxed in a wicker chair. The back cover finds her in a sexy black dress in the remote woods of Upstate New York, aiming and shooting a friend’s licensed .45 – a wild episode that had neighbours calling out the SWAT team, thinking something sinister was amiss before the situation was defused as a big misunderstanding. That’s the perfect metaphor for Laura and her deep, complex artistry: the adorable badass.

A compromise free, colourfully blunt songwriter, Laura brings her edgy, soulful and distinctively bluesy musical vision to life with the help of two Grammy winning producers – Steve Bigas, who won his Grammy for engineering blues legend Taj Mahal, and the legendary Daniel Lanois, an artist in his own right whose vast resume includes Grammy winning albums by Bob Dylan (Time Out of Mind) and U2 (The Unforgettable Fire, The Joshua Tree) and others by Willie Nelson, Neil Young, Emmylou Harris and the Neville Brothers. Laura had the great fortune of growing up influenced by “Uncle Danny,” a close friend of her father’s who took an early interest in her development as an artist. “He’s been listening to me sing since I was a kid, whether he liked it or not,” she says. 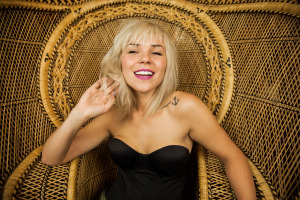 Laura and Lanois have enjoyed a spirited musical history together, starting their dynamic “musical journeys” after she finished high school when he took her to Nashville to watch him work with Harris. She also sang with his friends The Blade Family (including renowned jazz musician Brian Blade) on several episodes of the Louisiana based gospel TV show “Hallelujah Train” in Shreveport. In 2013, he asked her to sing a duet with him on a song he wrote (and she later added lyrics to) called “Papineau” – which he surprised her by releasing as a Valentine’s Day single. After spending three days at his L.A. studio recording, she flew straight to Casablanca (yes, the one in Morocco!) to start a whirlwind two month gig at a hip after hours pub. Closer to home, the Ancaster, Ontario born and based Laura has built a growing fan base at hotspots like Lula Lounge in Toronto, This Ain’t Hollywood in Hamilton and at various festivals and “Taste of” events.

Drawing on a wide swath of rock, jazz and R&B influences ranging from Etta James and Aretha Franklin to Billie Holiday, Sam Cooke and the late Amy Winehouse – artists “who let you hear the soul in their voices” – Laura noticed a theme developing as she and Bigas narrowed her growing catalog of tunes to nine perfectly honed tracks. She says the theme of Dirty Cheat can be summed up in three songs: the sly and sexy “Sweet Escape” (about a “friends with benefits” moment that offered temporary relief from life’s struggles), the dreamy, mystical Tom Waits inspired “Death Row” (about the troubling end of a relationship) and the trippy, seductively sly title track, about raining hell down upon a cheating boyfriend – making sure she was “someone that you never forgot.”

“A lot of people get cheated on, but don’t like to talk or sing about it,” she says. “For me, these songs are my catharsis, honest stories I am telling because I have nothing to hide. It’s easier for me to be true to myself than put on a cheerful front all the time. My goal has always been to portray real things I had been through – and I started writing my best songs till I had experienced the heartbreak of being cheated on. I bring a lot of interesting stories about my romantic adventures to the mix. The songs about my most recent heartbreak had the most power and heart in them.”